The project merges two current strains of research from UniVe and NEU. UniVe has been working in the past year on the study of feasible topologies for the backhaul network of 5G (and beyond). The proposed innovative approach is based on open data analysis from public administrations that describes the 3D shapes of urban/suburban/rural areas and allows to perform a line-of-sight analysis between buildings. In the image below we can see a portion of the city of Florence, Italy, in which the building height is expressed by the gamma of the greyscale image, on every building a gNB is placed, and the possible line-of-sight links between gNBs is drawn. 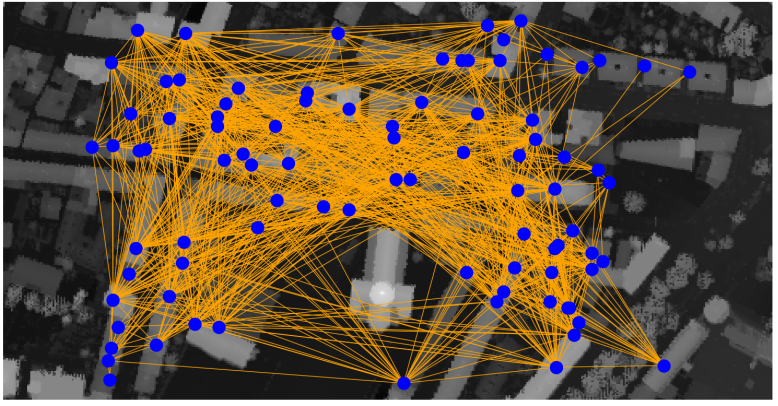 With this methodology we are able to run optimization problems to choose the best positions for the smallest set of gNBs, in order to maximise the ground coverage and minimise the cost of the infrastructure, leveraging on the cost reduction given by the wireless IAB links that replace the wired fiber links. Such analysis is extremely costly in terms of computational resources, it is based on the use of modern GPUs to perform raytracing, and thus, it has a limited level of detail in the radio propagation modelling [Gemmi2022]. In the last few years NEU developed Colosseum, a large-scale wireless testbed for experimental research [Bonati2021]. Colosseum is composed of 256 software-defined radios and a massive channel emulator core called MCHEM. 128 of these software-defined radios are connected to a dedicated machine that can represent either a mobile terminal or a base station of the scenario. Then, all the software-defined radios are connected together through MCHEM, which enables the researchers to test the network under different environments and RF scenarios. In fact, the channel emulator can be programmed to model the RF conditions of any environment up to a size of 1km² and with 65536 radio channels.

The challenge of OR²AN²G is to use Colosseum to emulate the performance of a backbone network as those studied by UniVe, leveraging on the excellence of the two approaches: a realistic scenario generated from real data, and an extremely powerful experimental facility to perform detailed performance analysis.
The core of the project is the realisation of the necessary components to perform the experiments, and an initial set of experiments to validate the produced code. The project will enable experiments that will analyse both the resiliency and the capacity of these backhauls with respect to their cost, in order to answer questions such as:

OR²AN²G addresses two NGI topics, Strengthening trustworthiness and resilience of internet and Open Internet Architecture Renovation, as it if focuses on the study and experimentation of Next-Generation Wireless Backhauls on state-of-the-art 5G to increase the efficiency and resilience of mobile access networks, by taking advantage of open architecture solutions such as O-RAN. All the realised code will be made open source and will provide novel tools for the academia and even for the industry to experiment with IAB in simulated, emulated and even in testbed experiments, thus speeding up the adoption of new solutions.